Speculation on military systems often turns into an exchange of uninformed guesstimates, obtained by eyeballing measurements. While in most cases it is the best that can be done without access to classified information, physical laws still apply to those systems. A handful of physics formula help constrain their performance, so I have gathered a few here (mostly for my future use). They deal with radar and optical sensors, ballistics and finally aerodynamics.

R is the radar horizon range in kilometers, h is the antenna height in meter, and a is the target altitude in meter. It limits the detection range of radars (and optical sensors too) no matter their power.

with R the maximum range a target of radar cross-section σ can be detected by a radar with minimal detectable power Pe. Ps is the emitted power, G the antenna’s gain,  λ is the wavelength of the radar. A more complete form of the equation gives the radar’s signal to noise ratio (SNR) for the same target:

With Pn being the power of the electronic noise, Pt the emitted power and Ps the power of the target’s return, Gt and Gr the gains on transmission and reception (assumed to be the same in the first formula), k the Boltzmann constant, To the temperature of the receiver or of the background the radar is looking at, B the bandwidth of the radar, Fn the noise figure of the receiver and L the emission+reception losses between the antenna and the electronics.

G is the gain of an antenna of effective area Aeff (or of physical area Aphys and efficiency Ea) at wavelength λ. It is limited by the diffraction of radio waves.

Radar cross section σ of a rectangular reflective plate of dimensions Lx and Ly, seen at the angle (θx,θy) and at wavelength λ. A larger surface has a larger RCS when viewed head-on but the energy is spread over a narrower angle. sinc is the cardinal sine function.

Using the Doppler effect, a radar can measure the speed of targets towards or away from it (ie in the radial or range direction). The speed resolution ΔV depends on the wavelength λ and 𝜏,  the time during which the target is observed.

A radar can build a precise picture of objects by combining its good range and Doppler resolution. This is called range-Doppler imaging or Inverse Synthetic Aperture Radar (ISAR). The resolutions are given in the figure above.

Resolution of a telescope

D is the distance to the target, a is the aperture (diameter/width) of the sensor, λ is the wavelength of the sensor. This is the maximum resolution, limited by the diffraction of electromagnetic waves.

Minimum size of a focused beam

is the full width of the spot beam of a laser of wavelength λ focusing at a distance f using a mirror of diameter d. The spot can be much smaller than the mirror, so the laser can concentrate its energy and destroy materials much tougher than the mirror’s material.

Speed of a rocket after burnout (Tsiolkovski’s equation)

Δ is the speed difference between before ignition and at burnout,

is the ejection speed of the rocket’s gasses (usually around 2000m/s for solid rockets, and usually reported as the specific impulse),

is the initial mass of the rocket (fuel + the rest) before ignition, and

the final mass after burnout

Range of a rocket

d is the distance crossed by a rocket in parabolic flight, ignoring aerodynamic forces. v is the initial speed of the rocket, g is the acceleration of gravity and θ the firing angle (0 for horizontal firing). It is only valid for ranges far smaller than the perimeter of the Earth.

t is the duration the rocket spend in flight, the rest is the same as above.

This is the maximum range of a rocket, obtained when θ = 45°, and is valid for ranges far smaller than the perimeter of the Earth. For long ranges, the relationship is this: 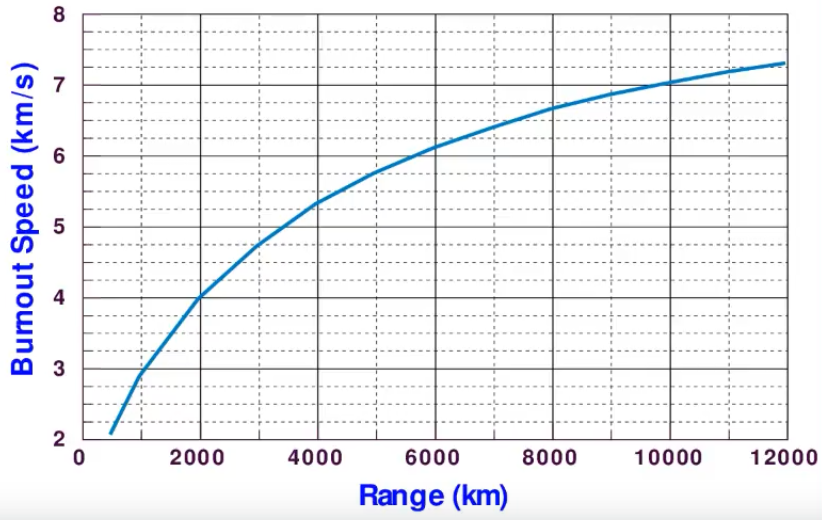 and the injection angle needed to achieve it is given by

For the maximum range trajectory, the rocket reaches a maximum altitude of h

Vo is the initial speed, and h is the maximum altitude reached when firing with θ = 90°

During reentry, a reentry vehicle experiences its maximum deceleration at altitude

with β the atmosphere scale height, ρ0 the atmospheric density at sea level,  Cd the coefficient of drag of the vehicle, A it frontal area, m its mass and θ the reentry angle.

The speed is given by

Applied to a 150kg conical IBCM warhead with a coefficient of drag of 0.3 and a diameter of 30cm, on a 22° reentry trajectory, this give a maximum deceleration altitude of 10km, at which point the warhead goes at 5km/s. At sea level, the speed is 2km/s.

The ultimate tool for rocket trajectory and design simulation is ZOOM. It can optimize both at the same time, giving a good estimate of what professional rocket designers would end up with given a required range and payload, and with a given level of technology.

V is the speed of the aircraft, L/D is lift/drag coefficient, Isp the specific impulse of its engines, Wi the mass at take-off and Wf the mass at landing

Missiles that move through the atmosphere are gliders, as they are in general unpowered once the booster shuts off.

Max range R of a glider before it hits the ground:

Max range of an intercept against a target of speed Rt and distance R at the moment of the shot:

Velocity loss of a glider in a turn:

Δθ is the turn angle, Δv the speed lost to drag in the turn